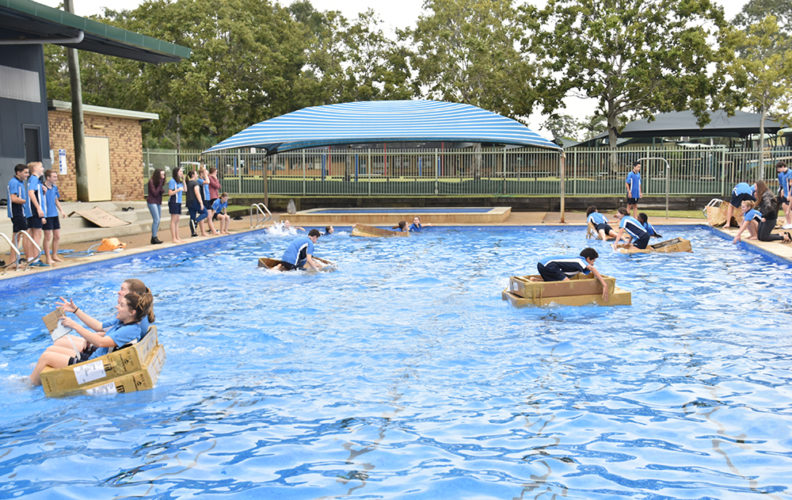 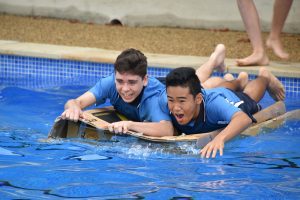 As part of preparation for their four-day survival camp beginning this week at Somerset Dam, the Year 9 Challenge – The Next Step students have been given the opportunity this term to develop teamwork and communication skills.

On Friday 19 May, students met at the swimming pool and were divided into groups for a surprise challenge –  to construct a boat out of cardboard boxes and participate in a race across the width of the pool. They were supplied with large cardboard bicycle boxes, tape and scissors, and a time limit to complete their design and construction.  The challenge required 4 members of each group to cross the width of the pool twice on their ‘vessel’.  It was up to each group to decide how many members of the group would cross the pool at one time. 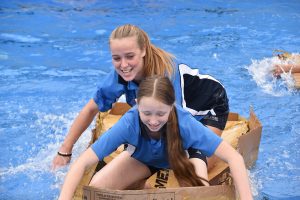 As the 5 minute countdown to the voyage began, there was a mad scramble as boxes were madly folded and adjusted, edges were hurriedly trying to be sealed, and the tension of boxing tape peeled alongside the pool.

Mr Dever counted down, 3-2-1, and the teams were off! ‘Were the vessels even going to float?’ was a question on many students’ lips! Within a short space of time it became evident that staying dry, which had initially been expressed by a number of students as their priority, was now giving way to the more pressing reality –  staying afloat.  As members of the groups bobbed, floated, and madly paddled across the water, the urgency became more intense as their cardboard started softening, for some at a rapid rate due to design and construction ‘flaws’. 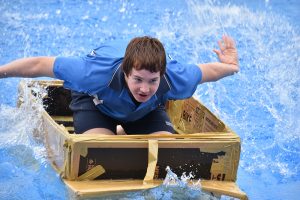 In amongst the commotion of sinking crafts, men and women overboard, the gasping of breaths in the cold water and the yelling from team members for their sailors to get back quickly, it was clear to us humoured, spectating teachers that all the groups had exceeded our expectations in their design and execution of the challenge.  Some had even managed to complete the challenge and stay dry on their traverse!

We are looking forward to seeing the Year 9s continue to navigate their way through the many challenges they will need to collaborate on during survival camp – challenges they may need to complete in order to eat their next meal… Watch this space for news of their experience!