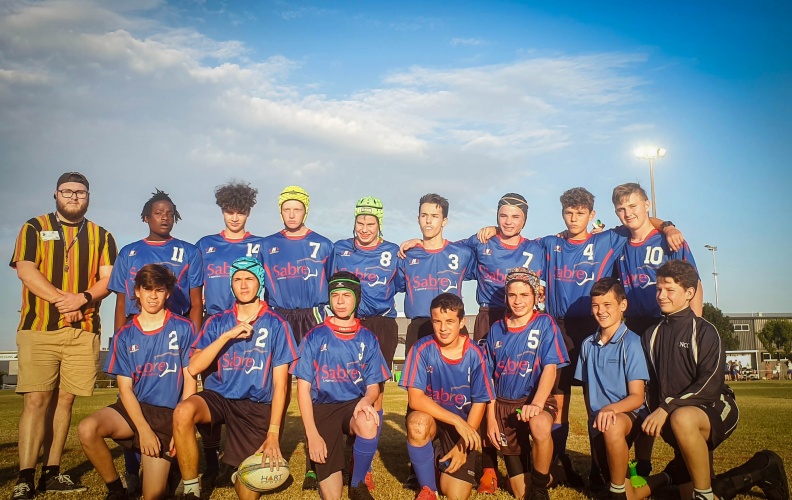 The Intermediate Boys Sharkies took the field recently for the first time in our history of the College Cup. There was considerable hype early on between the seasoned players about how many games they’ve played for their clubs but that was put to rest with an awesome loud (hold-hold-lift) warm-up while the other Junior games were on.

The coach spied the refs were enforcing scrums. So, with swift thinking, a scrum team was quickly formed with the best scrum drill ever seen! The boys took to their new scrum roles like experts! Abiding by COVID- 19 safe plans, the boys filled up their water bottles and waited for their game. They didn’t look nervous – they looked like a strong team!

First half went quickly and Sharkies played as one team, not relying on one or two individuals – they all played their part. They were an excellent team to watch who played by the rules, despite some missed and extremely unlucky calls going against them.

The opposition, Southern Cross, had a couple of fast wingers who slipped down the sideline to keep scoring but there were always Sharkies who committed to the chase and even took the ball back at one point because the opposition couldn’t stay inside the sideline. That’s some dynamic defence from the Sharkies!

With a few tries against them and a player out from injury, Sharkies went back stronger in the 2nd half and saw a couple of calls finally go their way but this time they came up short. They  already have plans for taking it to Mueller next week in the earlier time of 4 pm.

Great game, Sharkies! Just know our team has been given directive to source a few more Yr 9/10 players to keep the team healthy, strong and sustainable through the next seven rounds.

Thank you to the parents who were available to show their support. Thanks also to Ryan S, Ashleigh Y who helped with team preparations and was touch judge and Bronson M who ran the tee!