Year 6 student, Jake Ayres, competed in the GKR International Karate ‘National Finals’ Tournament in Melbourne on Saturday 24 November and took Gold in his age group. He is now the National Kumite Champion for 2018 for his age division.

The tournament was held at the Wantirna South Sports Stadium in Victoria. Over 620 competitors from all over Australia and New Zealand were qualified to enter. Jake made it through four gruelling rounds to make it to the final and eventually win, making him the National Champion for his age group. Some of the opponents were black belts, including a first dan black belt, yet Jake still held his ground and won every fight.

Jake started karate at four years old and is a member of the Qld State Team. Jake trains at least three to four times a week in Albany Creek and Belmont. Great job Jake, your parents and school are very proud! 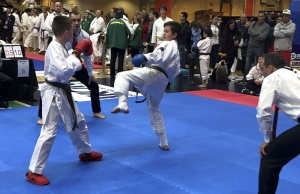